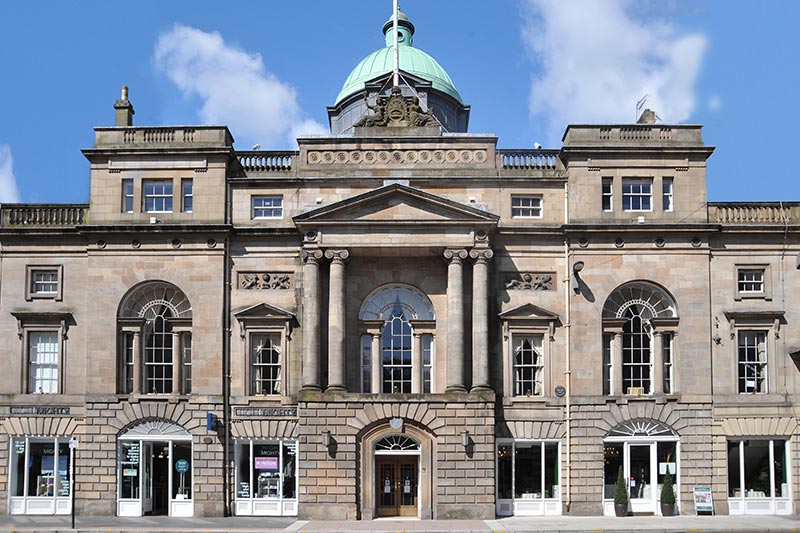 With the exception of the medieval cathedral, it is the oldest building in Glasgow to still be used for its original purpose.

However today it also functions as one of the most opulent wedding venues in Scotland.

In addition to the fabulous Saloon for ceremonies, it also has the spectacular Grand Hall for receptions.

Let’s take a closer look at what a Trades Hall Glasgow wedding would be like. 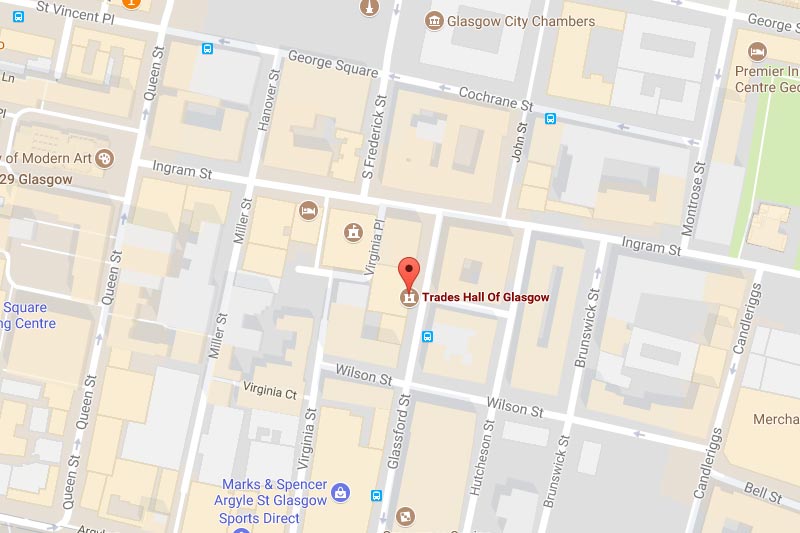 You’ve probably guessed from the name where Trades Hall Glasgow is situated.

However to be more specific, the property is in the Merchant City a few minutes walk from George Square.

It is often referred to as “the hidden gem”, and is certainly one of the best wedding venues in Glasgow.

There is no onsite parking in this busy part of the city, but you can get special rates at the nearby NCP Glasshouse carpark.

Prices are approximately £6 for 24 hours.

And if you would like to put on transportation for your guests, large vehicles can pull up right outside. 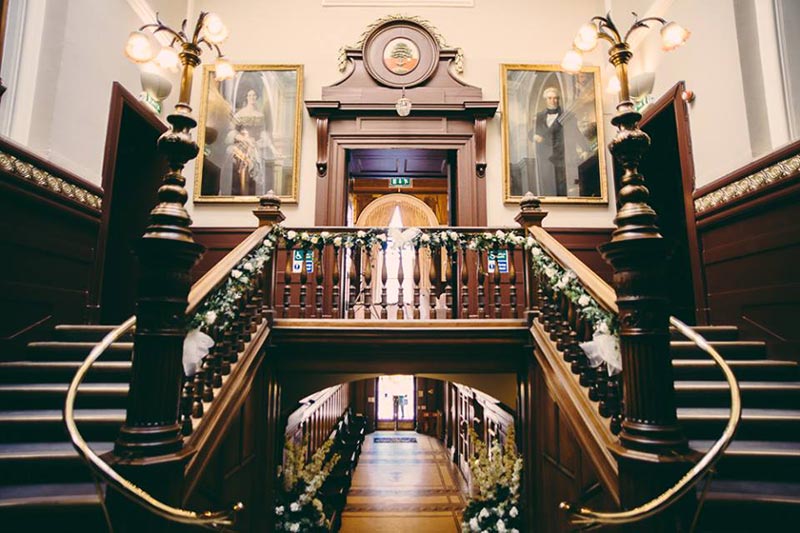 As with most wedding venues in big cities, you’ll need to be prepared for plenty of hustle and bustle.

The Merchant City is a busy area, but it’s also known for its stunning architecture and magnificent surroundings.

Once inside Trades Hall Glasgow, you’ll find the opulent interiors are a fantastic haven from the congested streets.

And because this is an exclusive use wedding venue, you can rest assured that you will have absolute privacy.

The Trades Hall Of Glasgow 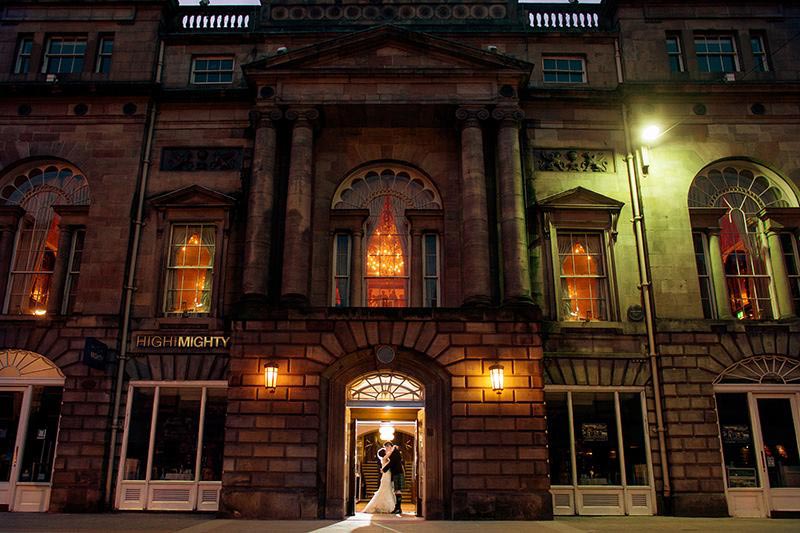 Designed by Robert Adam and built in 1794, this stunning piece of architecture is home to The Trades House of Glasgow and its 14 Incorporated Crafts.

Inside you will find a wealth of historic features, with the intricate an opulent interiors really creating a sense of occasion.

The Grand Hall is most commonly used for receptions, and can accommodate as many as 250 evening guests.

With the adjacent Saloon ideal for ceremonies.

You even get a complimentary room with ensuite facilities, which the bride and groom can use as a private space.

The entire building feels very special, and if you’re looking for the wow factor then you’re going to love this wedding venue. 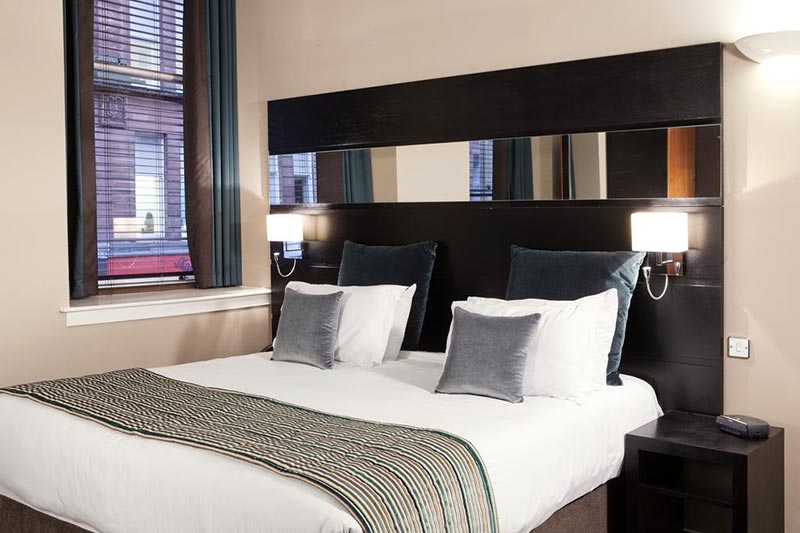 There is no onsite accommodation at Trades Hall Glasgow.

But given its central location, that’s not likely to be a problem.

A short walk and you’ll find a huge range of hotels to suit all tastes and budgets.

And if you’re looking for some good deals, reduced rates have been brokered at a number of properties: 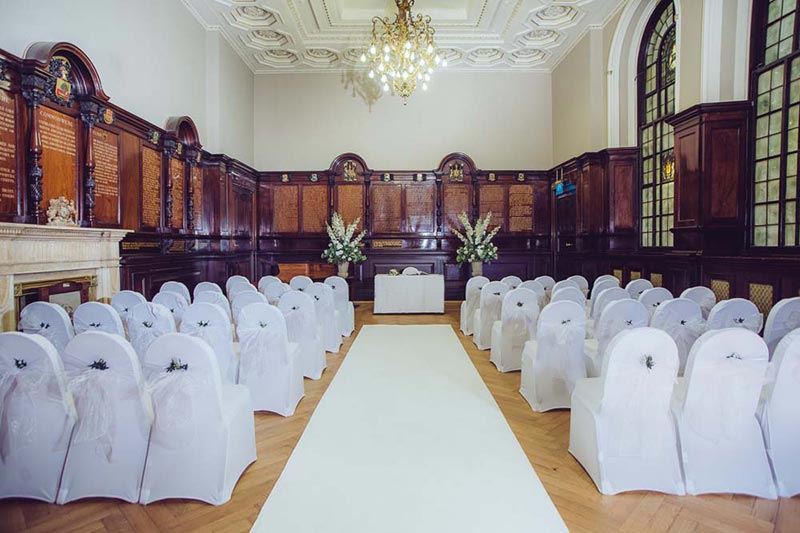 For your ceremony, the Saloon with its mahogany panelled walls and inscribed gilt lettering, is absolutely beautiful.

It has three newly restored stained glass windows, which let in lots of natural light, and stunning baroque chandeliers.

And to top it all off, there’s a lovely white marble fireplace.

You can comfortably seat up to 90 guests in this room, which is directly connected to the Grand Hall where you will most likely have your dinner reception.

Dinner receptions can also be had in the Saloon, providing you have 60 guests or less. 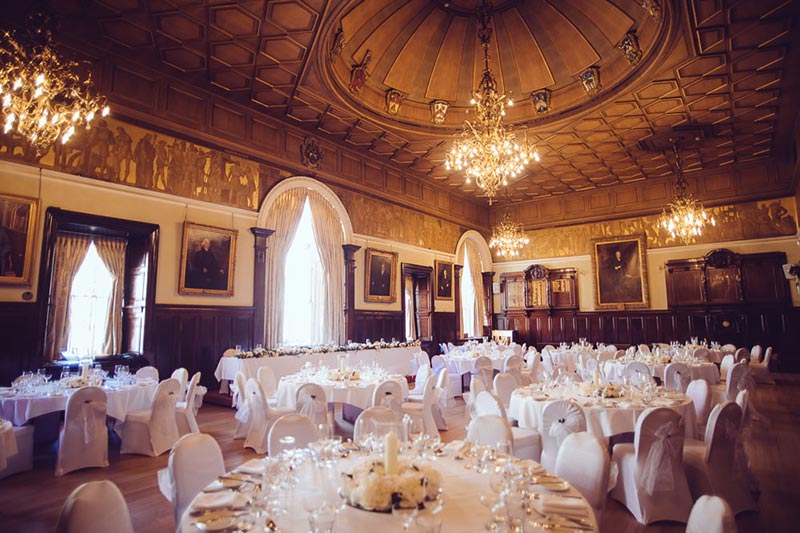 For your drinks reception there is the bright and spacious Reception Room, which is much more modern in its appearance.

You can actually use this room for a more intimate dinner reception too, assuming you have 20 guests or less.

Most people go for the flagship Grand Hall though, which is elegant yet opulent and flooded with natural light from its five large windows.

It’s without question one of the best reception rooms in Scotland, and can comfortably seat up to 220 guests for dinner.

You can fit a further 30 guests in for the dancing too. 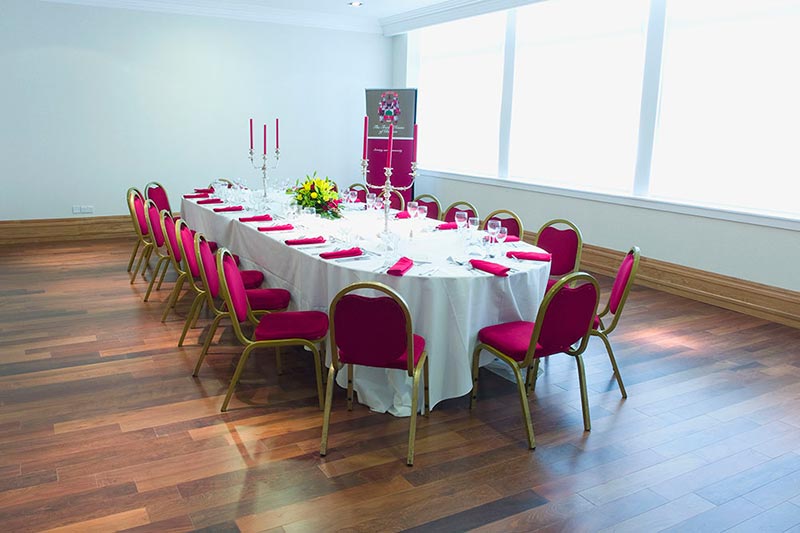 The catering is handled internally at Trades Hall Glasgow.

Their team of chefs have created a menu using the finest ingredients, which is guaranteed to exceed expectations.

The wedding coordinator can go through the menu with you, and help with your selections.

And there’s even a children’s menu, which is less than a third of the adult price.

When it comes to the drinks a cash bar will be provided, and specific beverages can be arranged.

You also have the option to bring your own wine and champagne, for a corkage fee of £10 and £15 per bottle respectively. 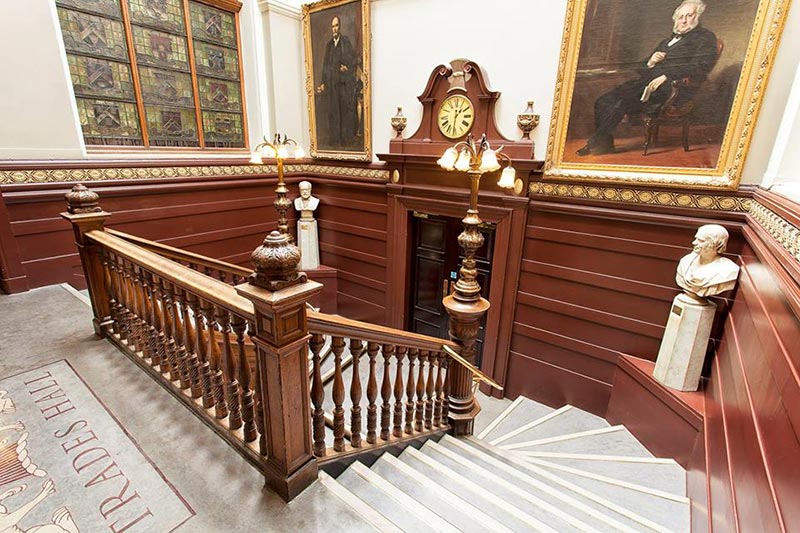 When it comes to your wedding photographs, you’re going to be a bit limited in terms of outdoor shots.

Although directly in front of the beautiful building has proved popular with couples in the past.

Inside though there are lots of lovely locations, many of which are flooded with natural light.

The beautiful staircase has been a favourite in previous weddings.

For the really adventurous, there’s a balcony leading off the Grand Hall which could make for a great shot. 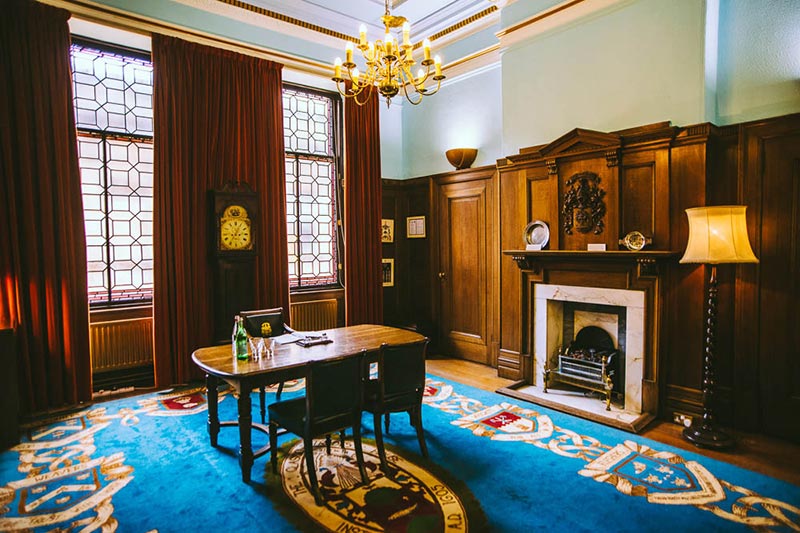 The Trades House of Glasgow was originally established in 1605, and over the years it has played a pivotal role in training and fostering trade and industry.

Today it’s a registered charity, which focuses its support on deserving causes and individuals across the City of Glasgow.

This includes training and educating the youth of today.

Because it’s a registered charity, all income from weddings and events must be invested in these great causes.

Which means by hosting your wedding here, you’ll be contributing towards helping the people of Glasgow. 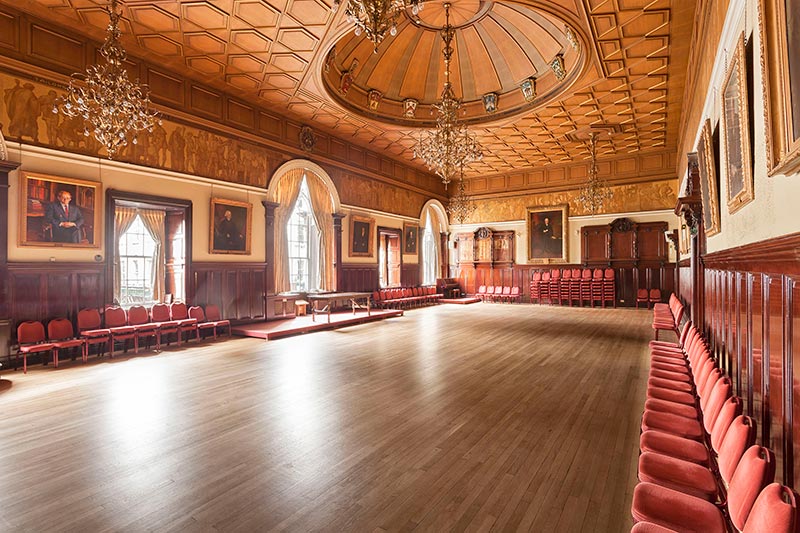 For accurate Trades Hall Glasgow wedding prices, you should contact the venue directly.

Their wedding packages can be tailored to meet your specific needs.

However to give you an approximate Trades Hall Glasgow wedding cost:

The prices above are for a summer weekend. 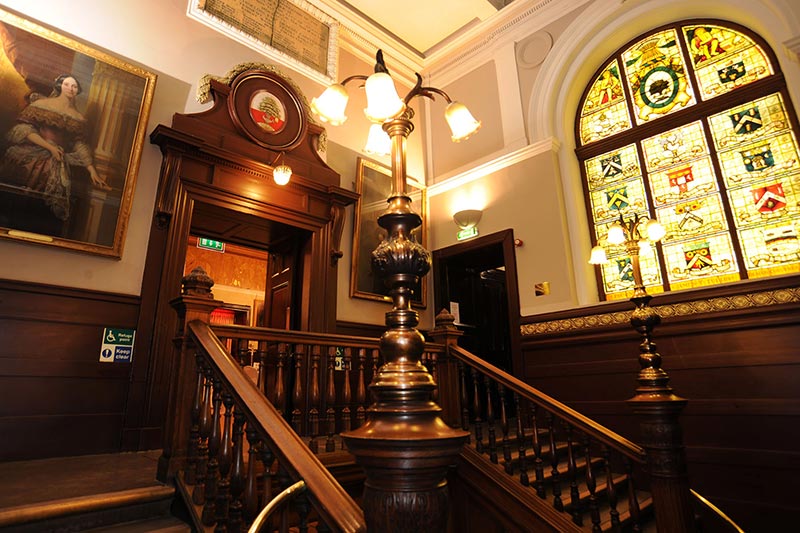 So those are my 10 reasons you should consider Trades Hall Glasgow as your wedding venue.

Of course everybody has different tastes and opinions.

However if you are looking for an exclusive use function suite, in the heart of Glasgow’s Merchant City, with the most spectacular Grand Hall for your reception, and a beautiful Saloon for your ceremony; then Trades Hall Glasgow just might be the place for you.

Whilst you are here, you should take a look at some of the other wedding venues in Scotland, featured on White Rose.

You can also find The Trades Hall of Glasgow’s website here.

Good luck with your wedding planning.